On April 10, the National Association of Sportsmen announced the production and sales data of China's passenger car market in March. According to the data, in March this year, the national narrow passenger car production was 2.156 million, a slight increase of 1.5% year-on-year, and the sales volume was 1.979 million, an increase of 4.1% year-on-year. Cui Dongshu said that from the sales in March, it can be seen that the automobile market demand structure is undergoing drastic changes, that is, the sales growth of cars and SUVs has gradually begun to converge. Of course, it should also be noted that the relative decline in sales of SUVs in March is significant.

From January to March, China's narrow sales of passenger cars totaled 5.669 million vehicles, an increase of 4.4% year-on-year. As a whole, the growth rate of narrow passenger cars in China in the first quarter of 2018 remained stable. At the same time, sales of independent brands performed outstandingly in March. The performance of the joint venture brands was relatively polarized, and the Korean system showed a significant warming trend, which was an increase of 30% year-on-year. 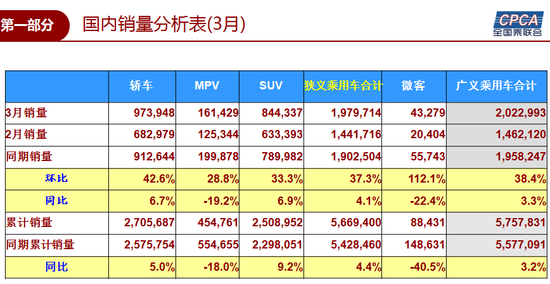 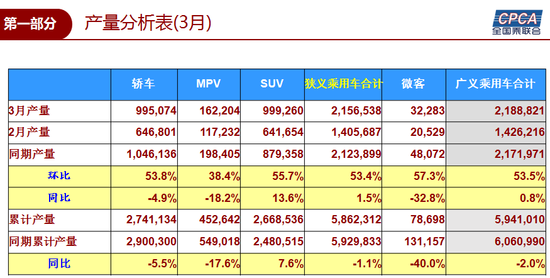 From the perspective of narrow domestic sales of domestic passenger cars, the top three are SAIC-VW, FAW-Volkswagen, and SAIC-GM, with sales of 181,000 vehicles, 162,000 vehicles, and 157,000 vehicles. In general, production and sales are relatively normal, with overall sales in the first three months being weak. 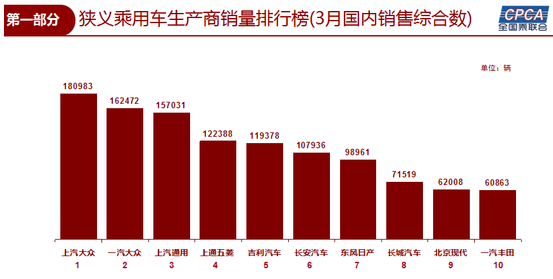 From the sales list of narrow-sale passenger car manufacturers, the sales performance of the major automobile enterprises in March was strong, while the second-tier car enterprises showed a trend of declining sales year-on-year. The characteristics of the two levels of differentiation increased, and the C-suite expected the trend of its polarization. Will also be in continuation. Cui Dongshu said that how the second and third line companies can save themselves is a topic.

The Federation of Travel Unions said that the most obvious feature of the auto market in March was the contrast between the return of the Korean system and the weakening of the Japanese system. Among independent brands, Geely's overall sales performance is strong. Great Wall Motor Co., Ltd. posted a good month-on-month growth, but its overall performance was slightly lower than expected. Among them, Haval H6 performed well and returned to the championship position of its own SUV sales rankings. With the tightening of financial deleverage, the demand for commercial circulation-type MPV continues to be weak, and the performance of some outstanding auto makers is dull. Cui Dongshu said that the current consumption upgrade is more and more obvious. Luxury cars are getting better and better. Volkswagen, General Motors and other high premium brands have performed well. The sales performance of GM and Wuling brands is the sales performance of high premium brands and entry brands. representative.

In terms of new energy sources, the wholesale sales of new energy vehicles in March totaled 56,000 units, which was a year-on-year increase and a 90% increase from the previous period, indicating an unexpectedly explosive growth. With the release of the new subsidy policy in February, it began to look for market opportunities in accordance with the policy rhythm. BYD, BAIC, SAIC, Chery, JAC and other car companies will also begin a new round of layout work in the new energy market.

In the new energy market, with the release of the new energy subsidy policy in 2018, car companies began to adjust their product strategies in line with the policy, hoping to gradually free enterprises from dependence on subsidies and achieve independent development. In the future, new energy vehicles will gradually become market-oriented.

According to the announcement of the fuel consumption of the Ministry of Industry and Information Technology in recent months, the blending models are gradually being enriched. The BYD, SAIC, and GAC of the self-owned brand are the main manufacturers of blending and mixing. The recent models of Changan, Great Wall, Geely and other companies are also blending models. All have their appearances. The GM, Ford, Hyundai, etc. are also registered in the announcement and sales. According to the expectation from the CSC, the future of the blended models is still a large potential market. With the price of autonomous pure-electric A0 SUVs entering the market, the new energy market has shifted from subsidizing to stimulating consumer demand transformation. At present, the intermixing is still focused on special groups such as Shanghai, and the trend of inserting mixed models will appear in the future to stimulate consumption potential.

It is expected that the growth rate of production and sales in April will not be much affected by the Sino-US trade war temporarily.

In April, there are 20 working days. The CCC expects that there will be no significant increase in the production and sales volume of China's passenger vehicle market in April. At the same time, dealer inventory pressure at the end of the first quarter of this year is small, and the value-added tax rate for manufacturing and other industries after 1 May will be lowered by 1 point. It is expected that part of the domestic wholesale sales volume at the end of April may shift to the beginning of May. At the same time, the consumption squeeze problem of the real estate bubble is still continuing. The lack of consumption in the central and western cities and small and medium-sized cities will still affect the entry-level consumption growth of self-owned brands.

At present, many car companies will not only locate core products in the future, but also mobile travel services will become part of the core products. With the demonstrable effect of the high decentralization and high profit margins of the DDT network, the high profits in the field of travel will also provide certain opportunities for car companies to extend their service market.

For the Sino-U.S. trade war, the CCC indicated that it would not affect the auto market at present, but it would also make the domestic auto market into a relatively complicated state. Chinese cars should enter the US market with caution. If they enter the U.S. market, Chinese car companies may become targets. . In fact, at present, Chinaâ€™s autos are still exporting to developing countries and mainly relying on domestic demand for development. At the same time, Chinaâ€™s vehicle exports have not improved substantially for developing countries, and there has been no substantial breakthrough in some of the dominant markets.

China best Mortuary Lifter,  it is made by the 304 stainless steel, you can choose with cover or not, and we can do one-stop supply of Mortuary Equipment, save your time, save your money, as corpse refrigerator, dissection table, washing station, washing tank, lifting cart, corpse cart, coffin cart, dissection equipment, corpse Incinerator, etc.